On the risks for mandatory evactuations... 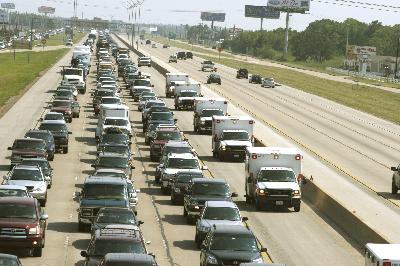 Houston, Texas residents were advised not to evacuate for Hurricane Ike this week, in an attempt to avoid a repeat of the chaos of Hurricane Rita in 2005, when ten times more people were killed during the evacuation than in the storm itself.

Meanwhile over 200,000 residents did not take the advice to evacuate the Galveston area, with authorities anticipating a major search and rescue operation after the hurricane has
passed.

Emergency services in Galveston have effectively shut down operations for the duration of the emergency.

It’s becoming difficult to figure out when to follow government advice and when to ignore it. From a government perspective, it is important not to have failed to warn people to evacuate. From an individual perspective, each unnecessary evacuation carries a high personal cost.

With unpredictable but frequent high-consequence events such as these many alarms will turn out to be false, increasing the perception that the next alarm will also be false (people tend to overweight recent experience when estimating probabilities). Authorities know this and therefore have to overstate the facts to get people to act, people grow more cynical, and the cycle continues until a real disaster occurs.

Sometimes I wonder if the authorities should take a leaf out of the meterologists book and start using probabilities: (just what does a 10% chance of rain mean anyway?). “There is a 10% chance of you being killed by the next hurricane if you stay where you are” might be better advice to hear. But the evacuations would still have to be mandatory: figuring out a complex evacuation plan to keep traffic moving and provide safe havens where individuals can decide
whether and when to evacuate would be just about impossible.