A Problem of Trust

A look at one of the reasons the economic meltdown has governments worried. 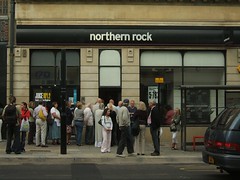 May you live in interesting times is supposed to be an ancient Chinese curse.[1] It’s certainly been another interesting week in the financial markets.

Stock market drops are nothing new: the market valuation of stocks is often irrational and booms and busts happen with “unpredictable regularity”. If the current financial crisis just affected the stock market politicians might be concerned about their pensions, but nobody would be really worried.

The difference this time is that the problem has become one of a lack of trust.

Can I trust my bank to repay the money I lend it? If not I would rather keep my money rather than leave it in the bank. If another bank doesn’t trust my bank, it won’t lend it any money either. If the bank doesn’t have my cash, it can’t lend as much money – the amount it can lend is decreased by many times the amount of decreased deposits. (At least that’s my understanding of the fractional reserve system.)[2]

Trust is a remarkable quantity: often difficult to acquire, it can be remarkably easy to lose and almost impossible to regain.

Many companies assume that when a disaster occurs, they will simply be able to borrow the money they need to keep their business going until they have recovered. But this isn’t a very safe assumption.

If a business looks like it is on the ropes with its building burned to ashes and its staff laid off, would you lend it money? If you wouldn’t lend money in this situation, why should your banker?

[1] Even if it isn’t, it most certainly should be.
[2] For an interesting explanation of the fractional reserve system, see the Money as Debt (YouTube video) (DVD & website). I’m not convinced by the political and economic arguments which start about half way through this video, but the explanation at the beginning of the fractional reserve banking system (and what money is) are outstanding.