On the Declining Security of McDonalds' Coupons

One of my guilty pleasures is a breakfast at McDonald's. Twice a year McDonald's issue discount coupons which make those breakfasts a little cheaper. But over the years, the security of those coupons has declined. 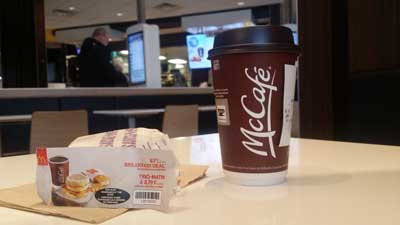 In the beginning, the coupon system worked like this:

The attack model for this system is quite simple.

So at this stage the major risk is staff collusion. Unless a staff member is giving out an unusually high number of discounts (detectable from the cash register logs), there is no major threat here.

I'm not sure when McDonald's introduced their smart phone app, but it significantly increased the attack surface. The way the application worked (it may have changed since I last used it) was this:

Over the past year, McDonald's has been introducing a new way of ordering: the touch screen kiosk. This replaces the cashier in the transaction with a touch screen, scanner, payment terminal, and receipt printer. If a customer uses this method of ordering, the system is as follows:

But do these vulnerabilities matter?

While it is interesting to look at the changing attack surface, all attacks (and possible defences) need to be examined from a business perspective. We can observe that:

This is in sharp contrast to the Subway stamp system (collect 8 stamps, get a Subway sandwich free) which had to be withdrawn after criminals started forging and selling the stamps. There forgeries had a significant value (one free sandwich) and involved a significant loss to the restaurant chain.

So although this is an interesting example of how changing technology changes an attack surface, unless McDonald's introduces a loss-making coupon with a significant resale value there is little for McDonald's management to be concerned with.