In the Grenfell Tower fire over 70 residents died because they could not be rescued. One of the tragic ironies was the prior advice given to residents: in case of fire outside your apartment, stay put. Good advice, normally. But there's a problem with general advice... 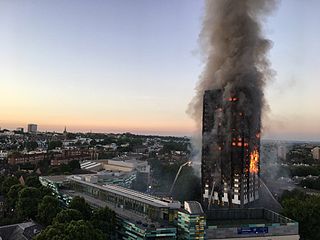 Shortly after midnight, on 14 June 2017, a fire broke out on the fourth floor of the 24 storey Grenfell Tower, a block of apartments in London.

The fire department was on the scene within eight minutes, but they were unable to stop the fire spreading. The fire spread rapidly along decorative insulation which had been recently been added to the outside of the building. As I write this, the death toll is 78, and there are still people missing.

One of the tragic ironies of the disaster is the advice previously given to the people in the apartments: "if there is a fire which is not inside your own home, you are generally safest to stay put in your home …". [Wikipedia]

I grew up in a "tower block" in London. My parents lived there for over fifty years. During that time there were a number of fires in that and in other tower blocks of identical design. The fire brigade would arrive, the fire would be extinguished, and next day there would be one smoke-blackened apartment and some smoke marks visible on the outside of the building. The building had been designed to be fireproof, and for anything short of a 9/11 disaster, it was. "Stay in place unless the fire is in your own apartment" was appropriate advice.

But general advice is not always the right advice. This was one of the difficulties I encountered developing a reference plan for the mobile business continuity product, Plan424. There are always cases when the general advice is wrong, and they are particularly easy to see in retrospect.

Within a couple of hours the fire which had engulfed the building was so intense that firefighters could no longer venture inside. Residents could no longer escape. If people had known what was going to happen in this case, the advice get out if you can might have been more appropriate.

It's always easy to argue that different advice should have been given after the event.

Did the fire brigade know that the building had been modified in a way that made it no longer fire safe? Did the emergency operators know? Of course not.

Prior to the 9/11 attacks, the standard advice for hijackings was for crew and passengers to comply with the hijacker's demands until the aircraft had landed, and then for the authorities to prevent the aircraft from taking off again and negotiate. It was good general advice which worked well for thirty years. The advice works well if the hijacker has some regard for his own life and that of his hostages. The passengers and crew of Flight UA93 fortunately realised this advice didn't apply to them, resulting in some lives being saved. It was good general advice, but it didn't apply in a specific situation. Because of the perceived change in the likely motivations of hijackers, it isn't the general advice given now.

No advice written in a business continuity plan is going to be perfect. It will always be based upon assumptions about how a situation will develop. In Plan424, we ended up adding a click-through disclaimer that the advice given might not be applicable in a specific situation.

But in life (and in most business continuity plans I've encountered) general advice doesn't come with such a convenient disclaimer.

So I will provide one for you here:

If the situation looks like it is developing as might reasonably be expected, the expert advice you've been given previously is probably correct.