Pickering Nuclear Incident - What They Didn't Tell Us

I was woken at 7:23 by an emergency alert on my phone that an incident had occurred at Pickering Nuclear power station. I tried to find out was going on...

If there's a good time to launch a surprise attack on Canada, it must be in the early hours of Sunday morning. Newsrooms are skeleton staffed, politicians and city staff are tucked up in their beds, and local radio is often unmanned.

So when an incident occurred at the Pickering nuclear power station, from a public information perspective, 7:23 on Sunday morning was probably the worst time it could have happened. I was woken by the blaring of my phone with an emergency alert: 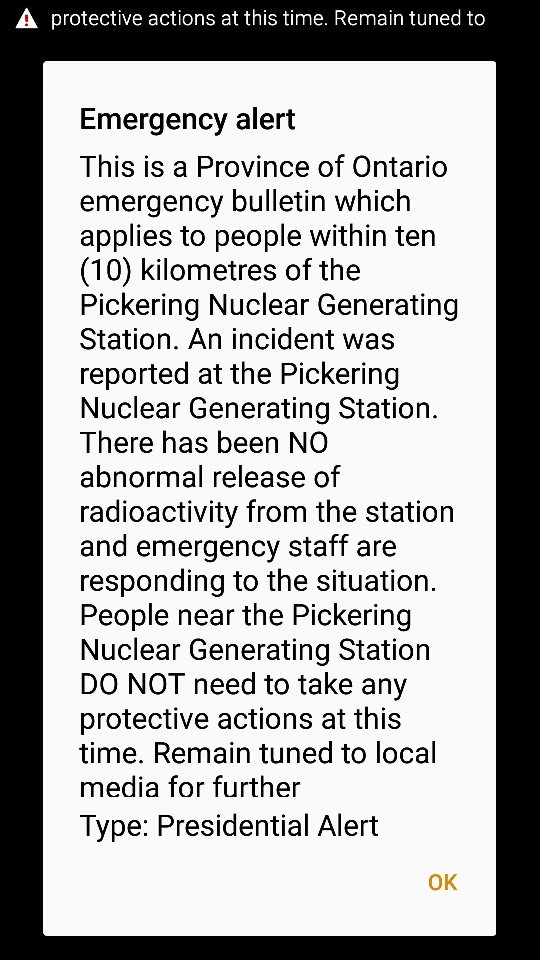 So what was happening? I tried the radio stations: national and local had normal programming, with no mention of any incident. The internet: the city of Pickering had lots of information about its emergency plan and where to find information if an incident occurred, but none of these news sources had any news. The best I could find was a news item which said that the government had sent out an emergency alert, and had then rewritten the alert as if it was an article, but provided no additional information.

There's always Twitter. The topic #pickering was trending. Lots of people were checking their maps to ensure that they weren't within the 10km evacuation area (Pickering is near Toronto, but not that near).

The mood was captured brilliantly by @AlissaPax:

I feel like "an incident at a nuclear facility" and "no need for concern" is exactly how EVERY disaster move starts. #pickering #ONappocalypse

And as @GillianPlummer pointed out:

Important update: the alert regarding #Pickering Nuclear was sent in error. There is no danger to the public or environment.

But we've all seen the films… Even though I believe @opg, in the films they would say that anyway, wouldn't they? And for conspiracy theory lovers, they're only saying the specific alert about Pickering Nuclear was sent in error.

If I was relying on news media or web sites dedicated to providing emergency information, at the time of writing I would still be hunting for further information and wondering if I should take the iodine tablets (issued to everyone within 10km of Pickering nuclear plant) or not.

[There were a lot of references on Twitter describing this as an AMBER alert. It wasn't — that's an alert about abducted children who might be at risk — but the Canadian system doesn't distinguish between alert levels and seems in practice to lack sane geographical limits on emergency broadcasts.]

Finally to sum up an apt Simpson's reference from @wesander:

A second alert was finally sent to my mobile phone stating that the initial alert was in error.

Alerting systems have false alarms. People make mistakes. Sensors go wrong. In the past the United States has alerted residents of Hawaii about incoming nuclear missiles. The USSR briefly had evidence from sensors it was under nuclear attack, and only the cool head of their duty officer prevented a retaliatory srike. The USA has scrambled aircraft in response to erroneous alerts. Mistakes will happen.

Although there will be much discussion about what mistakes were made in issuing the alert, the question which should not be overlooked here is why did it take so long after the erroneous emergency broadcast for the correction to be issued? This was an alert that was sent to millions of people. Presumably somebody knew for certain it was incorrect. Why did it take nearly two hours to correct it?